In the Charleston area there are several quasi news services allowing business owners to distribute their press releases to a wider audience.

Charleston Regional Business Journal has started their new BizWire and there is also Alan Cooper’s LowcountryBizSC. Each provides a mechanism for anyone to submit a story or release.

Great you say, until we begin to read items which are poor examples.

Consider this description of a new firm’s services as recently posted,

“[firm name redacted] intends to leverage innovative technology and marketing with outstanding service to provide a distinguished value to clients.”

If we tried, I don’t think we could have crammed more of 25 of the most overused words or phrases you want to avoid in a press release.

Use clear language in all your communications

Even more specious is this statement opening a marketing firm’s announcement of merger with a print services provider:

Would you ever want to admit that your firm has farmed out services? One doubts it. One would have provider networks, or collegial networks of service providers.

People, your words matter. Buy a dictionary. And get a thesaurus or at least use those available online or contained within your word processing program.

Avoid catch phrases and corporate speak. Just because it sounds cool is no reason to use trite expressions.

Over the last several years I’ve written a number of times about press releases. We’ve discussed online newsrooms, and how to develop and pitch story ideas and how press releases support your pitches. But I don’t think I’ve written about the press releases’ brother, the media alert which is sometimes called a media advisory.

What and when to send a media alert

A media alert is best used to call attention to an event that has components suitable for visual media coverage. That means television, digital media like blogs and more traditional print media such as newspapers and magazines.

Media alerts can be created from some of the content used in your press release but their format is quite different. They are not press releases. They are more direct and to the point. A media alert is precise and describes for the editor what visually interesting events will happen and why the outlet might want to assign a videographer, news reporter or photographer cover it. Of special interest to media is a chronology of events taking place so they may cover the visually compelling parts of the event. Frequently television news media don’t have time to hang out for an hour, but want to capture video of the visually rich bits. So help them out by providing a schedule that allows them to dispatch a videographer to capture what they want.

The advisory also contains a list of entities participating in the photo op and the organizer’s contact information so the reporter may call to get credentials organized or get more information. It’s also helpful to include a map, directions or link to a map to help media find the event location easily.

Who should get a media advisory?

You can view a great example of an online media advisory from NASA. You’ll notice how NASA is making great use of the web as a hub for their advisory. This way they can tweet, post and share the content without having to send the alert as an attachment or inline content. Media interested can use the information and access it from any location or with any device.

Click through to view an example from 2013 which we created for our client. [PDF] We invited the media to a behind the scenes rehearsal event. During the event, media were able to observe an opera rehearsal and meet performers. This event resulted in great coverage because of the event’s unique nature. Generally visual media don’t get invited “backstage.”

The other time you may want to send a media alert out is if you have a “presser” or a press conference. Generally these types of events are highly news-worthy and timely. Below you can view an image of a media advisory sent to media in advance of a press conference held years ago. You’ll note that the lead-in explains the reasons for the event and who will be there. 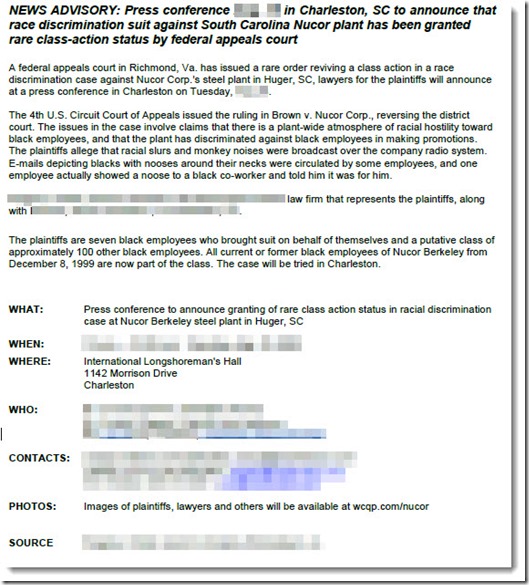 Information to include in your advisory

Always to be sure to explain the Ws: Who, What, When, Where, Why. And describe the event so the news editor understands why your event is worthy of coverage.

Do you have questions about when to use media alerts and advisories? Just ask below in the comments and I’ll be glad to answer. 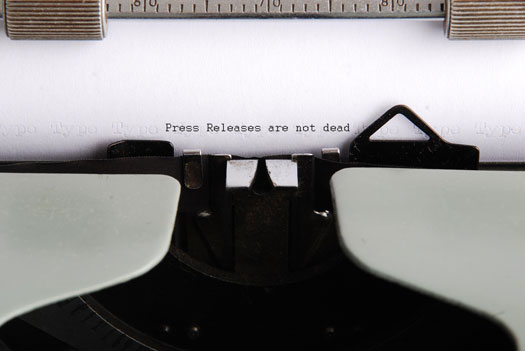 Press releases: there’s a right and a wrong way to use them

Google has said that press releases aren’t the right way to create inbound links to your website. Nor are press releases best used as broadcast materials to spam editors and reporters.

What are press releases for?

Press releases which tell your story clearly and which support your brand and business goals while featuring genuine news are a valuable item in your marketing communications strategy.

Despite the fact that we advocate having an online news room as a component of your website, from time to time you are still going to need a release. Releases are best used to support a pitch to a journalist or to summarize important announcements about new products, promotions or corporate mergers or brief media in a crisis.

1. Develop and tell a coherent, compelling story. What makes your company tick? How do you delight your customers? What sets you apart from the pack?

2. Don’t just tout your product or service. Develop key messages that answer the question: Why should anyone care?

3. Use plain English. Avoid obscuring your message by using industry jargon and talking “inside baseball.”

4. Get your reader to engage. Use compelling elements such as data, visuals, and infographics to illustrate your points. And include a call-to-action that drives people to a landing page.

5. Hook yourself to a star. Tie what you’re doing to something happening in the news–especially if it’s in your sector or a targeted vertical market. Shine brighter in the reflected light of someone in the news.

If you’re not inclined to write your own releases and remain familiar with local media outlets and the journalists who bring you the news, give us a call. We’re here to craft great stories from your stories.