Should your logo be a recognizable icon or unique?

I live in the Charleston, South Carolina area. A few years ago the old bridges spanning the Cooper River were torn down and a new breathtakingly beautiful bridge was built. The Arthur Ravenel Bridge is a suspension bridge that is a pleasure to drive over because of its architecture and ability to carry a large volume of traffic between Mt. Pleasant and Charleston.

Now as much as I like the bridge, it’s never occurred to me to use it as a component of my corporate identity, logo or in my advertising, but I think I’m in the minority. It seems that 8 out of 10 companies use the Arthur Ravenel Bridge, its towers or other features in their advertising.

Now it makes sense for the Cooper River Bridge Run to use it in their promotions and advertising, but for a home oxygen supplier?  It makes more sense for the Yarborough Applegate law firm because the letters of their names form an impression of the bridge’s superstructure and it fits for The Bridge 105.5 radio station to use it in their advertising. But I’ve seen the bridge used in real estate ads, restaurant ads, flooring company ads and business consultant’s ads. Just get over it!

Examples of logos which use the bridge as their icon 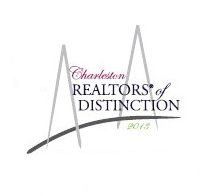 Sense of place or sense of customer? Which is more important?

If you do business in the Charleston area, I suppose you may want to use the bridge to give a sense of place in your logo or advertising, but wouldn’t you rather have imagery that depicts or speaks to how your customers use your products or services?

Your logo is a visual communication between your company and your customers.

Because of this, it should be distinctive. Individual. When customers see your logo, they should comprehend your brand qualities or understand the benefits of doing business with you. It’s lazy to use the most iconic image for your business sector or locale; the Ravenel Bridge in Charleston, the Eiffel Tower in Paris or a scale for a lawyer’s office or a chef’s toque for a restaurant.

When developing your logo and corporate identity, use a brand development process that clarifies your brand promise, qualities, benefits and features. Then your graphic designer can use this material to develop the best corporate identity materials for your company.

When your logo is developed, you’ll be glad yours is as individual as you and your company are.

Featured image by Photo by David Martin on Unsplash

How valuable is your brand name?

You may think you’re not a gambling person, but if you don’t own all your brand’s top level domain names, you’re sitting at the table, and throwing away all your aces. You could take a bit of advice from The Gambler

If you’re gonna play the game, boy
You gotta learn to play it right

Value can be fixed based on transactions, visits to your website and sales history. But a brand has value which extends beyond mere monetary transactions.

When you purchase your domain name for your brand, did you purchase every variable for it? If you only purchased one variant of it, you may be “out of aces” and leaving your business vulnerable to brand exploitation. As an example, no one would be better one than Ted Cruz*.

Ted Cruz announced that he is running for President as a Republican candidate. His conservative stance upsets many on the left and in the middle. Opponents of his candidacy took advantage of available domain names related to the candidate’s brand/name. And It didn’t take them long to get busy with mischief. Because the Cruz campaign didn’t purchase these domains, there is now a bit of PR kerfuffle for the team to pay attention to when they probably would rather be working on other aspects of their candidate’s campaign.

The mischief makers redirected the domains they purchased (which should have been purchased by Cruz and his campaign long ago) to websites which are antithetical to Cruz’s platform and stated views.

Anyone can purchase a domain name.

Back in the height of the housing bubble in 2006, homeowners who were disgusted with their homes constructed by a major national volume homebuilder, purchased a domain that was negative towards that homebuilder. They posted a website at that domain declaring for all the world how much they hated their homes and the builder. Even today,

When you purchase your brand’s domain name, purchase all available variants of it that you can afford. Include .com, .net, .org, .biz, .us and more. While you may never use these domain names to refer to a website, you don’t want to leave yourself vulnerable to pranksters or even competitors who decide to hijack your good brand and use it for their benefit.

As Kenny Rogers sang, “You gotta know when to hold ‘em.”

*We are not stating any partisanship nor support for any candidate by authoring this post. We are merely using this situation as a teachable moment for all business owners.

Your personal appearance is your brand identity

We’ve all had the experience — at the end of a long day discovering we’ve worn one black shoe and one blue shoe, or socks that don’t match or have worn our shirt inside out all day long…and no one noticed. When this has happened to me, I find myself wondering, “Why didn’t anybody tell me?” I also wonder who now thinks of me as sloppy, or someone who doesn’t attend to details.

For most of us, our personal appearance is important. We take care to groom ourselves to present a presence which reflects and reinforces our sense of self.

The ante is upped when you are a company delegate who speaks with the public or the media. You are an embodiment of the brand experience.

As a leader, you are the exemplar of your firm’s brand. You must check yourself in the mirror or ask your colleagues to review your clothing, appearance and presence to evaluate whether or not your appearance reflects the values of the brand.

When you make a personal appearance representing your business, you ARE the brand.

Because of a shirt, for a moment, the world was inadvertently focused, not on the Rosetta Project’s success — as the Philae lander approached a comet — but on Rosetta Project scientist Matt Taylor’s shirt which was insensitively selected, given his position of leadership and need to appear on camera for interviews.

@lievenscheire You think a shirt like this makes women feel welcome? I don’t. pic.twitter.com/ecoW7mLQMs

If the European Space Agency’s PR person had reviewed their team member’s appearance prior to interviews, perhaps all eyes would have been on mission success, not the shirt. With a bit more thought, the public relations team would not be defending the leader’s values and their congruence with the space agency’s, but would be talking more about the globally recognized accomplishment of getting a probe to land on a comet.

“I made a big mistake, and I offended many people,” Taylor said at Friday’s media briefing, his voice trembling, “and I’m very sorry about this.” Read more