Don’t leave your audience in the ditch

Metaphors, “figures of speech in which a word or phrase is applied to an object or action to which it is not literally applicable” are often used in advertising to convey ideas. Phrases which evoke mental images hotwire concepts into our brains. As a vehicle for an ad or presentation’s message, they provide gas to the car. (See, that was a metaphor…and if you read closely, you’ll find more automotive metaphors in this article.)

Many metaphors are based on old technology not known to your audience. Consider that we no longer dial phones, yet you may still find the word dial alongside a phone number in print ads, though more contemporary ads invite you to call or phone.

Many decades ago, newspapers published a morning edition and an afternoon edition. When breaking news happened, an extra edition was issued. Extra editions were hawked curbside by newsboys calling, “Extra, Extra, Read all about it!” To designate the extra edition, the newspaper’s masthead was topped with EXTRA in bold letters. Newspaper publishers in the US no longer do this. It’s assured that no one who is younger than 60 may understand this unless they are readers or fans of the 1992 Disney movie Newsies.

A Charleston area real estate brokerage recently used a billboard with the headline, “EXTRA, EXTRA” with the broker depicted as a newsboy. Cool idea if this was 1955, but this is 2017 and few people comprehend this metaphor, especially not Millennials — those born between 1981 and 1997. Yet, Millennials are the very people who are entering the homebuying market and fueling a portion of its growth. According to The National Association of Realtors®,

One consistent finding for the last four years of reports has been that buyers 36 years and younger (Millennials/Gen Yers)  is the largest share of home buyers at 34 percent (down from 35 percent last year). Sixty-six percent of these buyers were also first-time home buyers. The largest cohort in America is growing up and becoming more traditional in their buying habits.”

When you’re giving presentations, you can also trip yourself up by using metaphors which are not comprehended by your audience.

In recent news, during an interview the US President Donald Trump told The Economist that he invented the phrase, “prime the pump.” 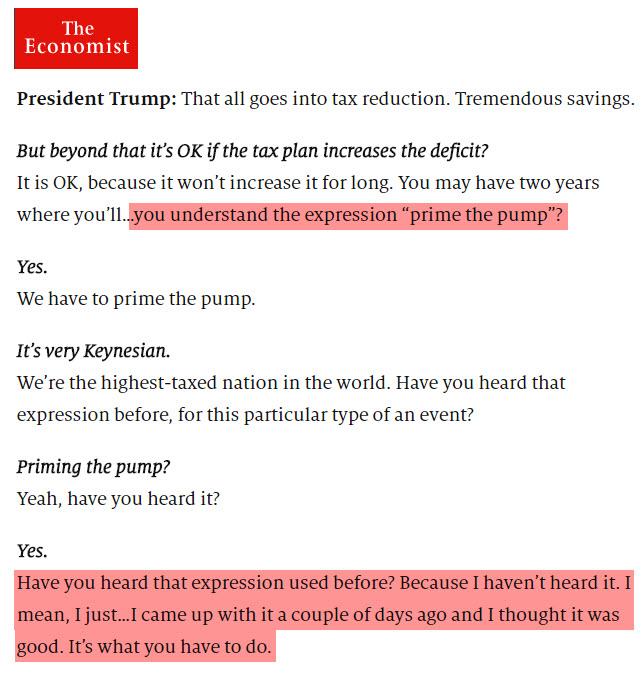 As many outlets have noted, he did not invent the phrase, especially as applied to economics of the economy. Given that most of us don’t use hand pumps to fill our basins and few of us siphon gasoline or other substances. There’s a significant group of consumers who did not understand the meaning behind POTUS’s sentence. He might have been better off with the term jumpstart, which most people do comprehend.

What other examples of outdated figures of speech have you read, heard, or seen being used incorrectly?