On an average day in 2011 according to Pew Internet and the American Life Project, the typical Facebook user spent time on the site primarily “Liking” other users’ content and commenting on others’ photos. This continues to be true today with Facebook users allocating their time on the site as follows: 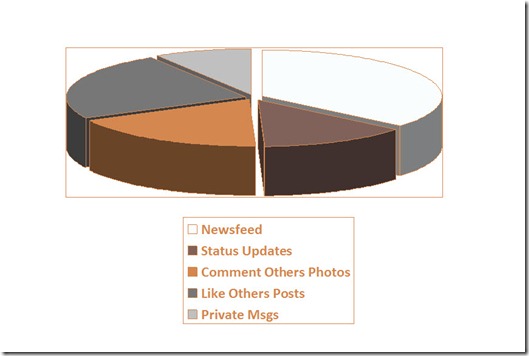 Facebook use may be on the decline, if you read recent data from Pew Research as I do. Sixty-one percent of Facebook users report “taking a break” from this popular social media site.

It’s no wonder that so many are decreasing their use of the site. Since the 2012 presidential election and Newtown tragedy, the invective and political ranting seems to be at a fever pitch. People are getting worn out. Though they may report that they are too busy, tired or don’t care, I think they have realized that increasingly, Facebook can be a time suck. And people using Facebook seem to have lost much of the fine art of civility. It seems lately I read more people venting and insulting others’ parentage, heritage, beliefs and lives.

Although sixty-seven percent of Americans use Facebook on a regular basis, more and more I read posts from people who whose lives have become saturated with Facebook and they choose to disconnect as culinarian and author John Martin Taylor did in his handwritten photo post reproduced above.

Reasons for taking a break vary, but most report that they are just too busy to “get on Facebook.” While people report they don’t have enough time to bother with Facebook I believe that people have become worn out with the self-involved, naval gazing that many do via the site. Pew reports the following data: 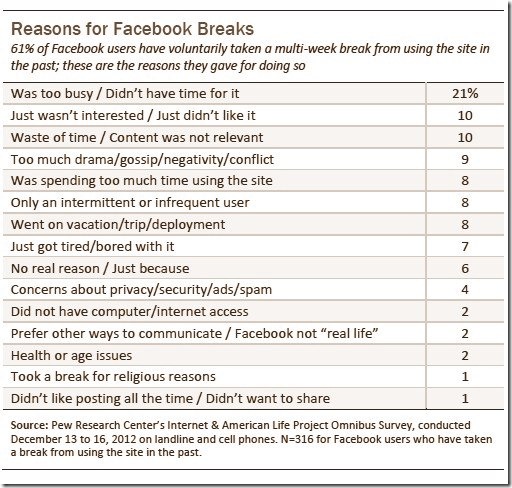 If your business wants to reach these increasingly disaffected users, you must design posts that reach people’s newsfeed, because not many people make it to your brand’s Facebook Page. Facebook has facilitated fewer direct business Page visits through new “like” opportunities. Facebook now suggests you “Like” a page from your friend’s post or after “Liking” a Page, at which time Facebook offers other Pages for you to “Like.” There is even a direct menu item to allow you to view Pages Facebook recommends to you as you can see in the screen grab below.

When asked if they plan to spend more or less time on Facebook in the coming year, increasing numbers of younger users report wanting to spend less time on the site. Your marketing will be impacted by this trend to a greater or lesser degree based on your customer demographic. The wise entrepreneur or marketing manager will increase or diversify their social media content distribution to other social channels as appropriate for your brand.

“42% of Facebook users ages 18-29 and 34% of those ages 30-49 say that the time they spend on Facebook on a typical day has decreased over the last year — these are both significantly higher than the 23% of users ages  50 and older who report decreased Facebook usage over the same time period.” 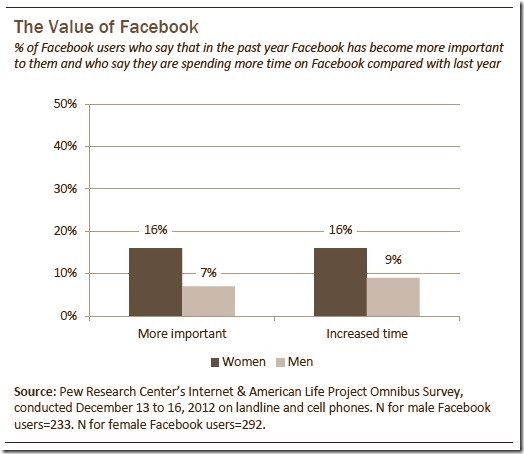 Women still report finding that Facebook is “more important” and will spend more time on the site.

Design your social media content to be appealing to your customers. Make sure it offers a way for them to engage with you by creating content that is helpful, informative, and fits with users’ needs. Analyze your brand’s interactions with Facebook users and if you find that you don’t have the engagement needed to be present in Facebook users’ newsfeeds, modify your content.

Use Facebook Insights to help you analyze and take advantage of what works best for your brand. Pay close attention to the time of day posted, content type receiving the highest interactions and the numbers of shared to direct your future posts. You can also pay attention to current news, and Internet memes to help you create content that is “of the moment.” The Harlem Shake meme has been adopted by everyone from animal shelters to senior citizens centers, feeding on the popularity of the topic. This video from a senior center has received thousands of views and shares as a result of being au current.

If you need assistance formulating, implementing or managing your Facebook marketing, or social media campaigns, call us. We’re here to help you increase engagement among Facebook users, plan and implement campaigns that fit your business.

2 thoughts on “Facebook Users Time on the Site and Activities”