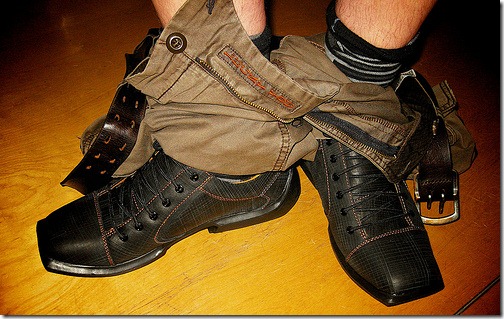 Don’t get caught with your pants down

A colleague recently announced his rebranding. He invited me via an email to take a look at his new branding and “soon to launch” website. Upon visiting the site, I found pages that had not yet been set up, sidebars that displayed below the content area due to conflict issues and the “Hello World” default WordPress post published on the site’s blog. I was embarrassed for him to be caught with his virtual pants down. It was, in my opinion, too soon to invite visitors to his company’s new home on the web.

Look at the source for issues

Upon examination of the site, I noticed the site is built on a purchased theme from ThemeForest, which is generally a good source of low-cost themes for WordPress websites. Of course when using a purchased theme your site looks much like everyone else’s site who has also used that theme. Unfortunately, not all low-cost themes are well written. We’ve had to repair bugs and poor code in purchased themes. We’ve also discovered themes not written to current WordPress standards. These deficiencies can make trouble down the line, such as when a theme loads a specific version of a script which also happens to also be a component of WordPress’ core functionality. There may be no conflict when the theme was purchased. In fact it may have been done that way in order to use some functionality provided by a version of the script newer than the one packaged with WordPress, but time marches on. And in the case of this example, this issue is guaranteed to cause a problem as WordPress evolves. In the case of one client whose site we manage, her site quit working because the theme was loading a version of a script that was far older than the script included in WordPress. We repaired the issue, and thankfully our client subscribed to our software maintenance plan, so she wasn’t penalized financially, simply because her original developers chose a questionably coded theme.

Other issues frequently experienced when purchasing a “pre built theme” are lack of clear directions for those setting up your site. Many times themes have specific short codes to allow custom functionality in pages and posts. But if you aren’t provided instruction as to how to use short codes, what good are they? The same goes for the ability to develop custom post types.

Being cheap hurts your brand

As a lay person, all you see is a cheap solution to the issue of how to get a website. But as WordPress specialists we see trouble ahead for you and your company. Cheaping out can hurt you and your brand by getting something that you won’t be proud of in the months to come.

Budget for a custom website that proficiently and professionally represents your brand and provides you and your associates ease of updates, and the promise of continued compatibility with future generations of WordPress.